Thousands of immigrants took to the streets of Los Angeles on May 1st to protest against President Obama’s failure to fulfill his election promise to legalize over 10 million illegal immigrants in the country. Despite this promise there had been a record number of over 400,000 deportations since President Obama took office. 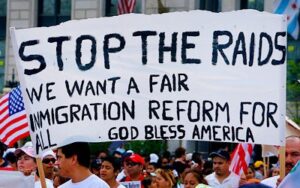 Prior to this protest, Illinois Congressman Luis Gutierrez organized a campaign throughout 20 cities to uplift the knowledge on the rights of immigrants. The immigrant communities are using their voting power to lobby president Obama to use his executive powers to bring in immigration reforms and to stop the deportations after congress has failed to make any progress on immigration legislation.

Before the May 1st rally, President Obama stated in New York, that revamping the Immigration system is one of the top priorities in his agenda. He followed this up by meeting influential Hispanics such as Eva Longoria to discuss issues of the Hispanic community and discussed the reintroduction of the Dream Act.

The 2012 election campaign will see the immigration issue being discussed at length since one cannot ignore the fact that the Hispanics represent over 15% of the American population.